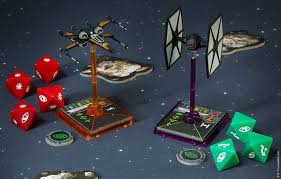 Gaming has fast become a past time that many take part in, however, manual board games may be making a comeback. Star Wars is a legendary film series and the games that followed were equally so. Gaming, online and board, fans around the world were glued to their seats as they took their place in the scenes that unfolded. While it isn’t commonplace for board games to feature in the top of any game ranks, with online games taking precedence, Star Wars: X-Wing Miniature Games Second Edition has seen the rebirth of board games.

The Details and Directions

This game requires the movement of small, miniature starfighters across a tabletop board by hand. Yes, you heard right, by hand. The aim of the game is blowing the opposing players fighters up and the use of curved rulers of differing sizes and lengths is representative of the stunts and turns that a pilot can achieve. Old school cards and tokens are used to keep track of the equipment used and statistics in the game and a dice which has been custom-made for the game determines how the combat unfolds. As more pieces were added to the game, the original version of the game became overcrowded and there were more additions featured.

The inclusion of the System Phase in the new edition of the game allows all the extra activities and tricks to take place but as an aside to the basic game. Plan your next move but before you undertake it, enter the System Phase and work magic with your ship. The inclusion of this phase in the game has created a smoother, faster pace to the eventually oversized original. The increased size of the cards has created a game that is played with so much more comfort and ease. While many gave groans of dismay at the impending new version, it is the best change to the tabletop game and holds enjoyment unlimited.